The High Court has handed down its decision in Calidad: by a 4:3 split decision, 150 years of precedent has disappeared into history.[1] Given some time constraints, this is going to be a high level summary only. There are two main areas of significance.

First, the High Court (by majority) has ruled that the sale of a patented product exhausts the patentee’s right to control further exploitation of the product. The right of a purchaser to use and deal with the product does not turn on an implied licence which, being implied, could be excluded by appropriate contractual terms.

Secondly, the High Court has given what is probably its first detailed consideration of what constitutes making a new product (infringing) versus merely repairing it (non-infringing).

On appeal from Burley J, the Full Federal Court had ruled that the reconditioning amounted to making a new product and so the patent infringed.

In allowing the appeal, the High Court unanimously held that refilling 4 categories of the printer cartridges did not infringe. In these categories, what was involved was simply drilling one or two holes in the cartridge case, injecting replacement ink and sealing the holes again. Thus, they had merely been repaired and did not involve making new products.

All judges also held that a fifth category, which involved the replacement of an unpatented component, a memory chip, with another, was not infringing because it too did not involve making a new product.

By a majority of 4 to 3, the High Court held that the reconditioning of four other categories was also not infringing. Nettle, Gordon and Edelman JJ explained why their Honours dissented on this point at [266]:

Category 5, 6 and 7 cartridges involved the making of new, different cartridges: because the processes used to modify those cartridges[440] included cutting off the interface pattern to make them fit a different printer from that for which they were designed. Relative to each cartridge in its totality, that was such a significant change to the form and function of the cartridges as properly to be viewed as changing each cartridge from the cartridge it had been into a new and different cartridge adapted to a new and different task. When that significant change was combined with the other modifications, there was a making of the patented invention thereby infringing Seiko’s patents.

68 The reprogramming of the memory chip in the original Epson cartridges and the removal of the interface patterns did not constitute the making of a new embodiment of the patented product. It may be accepted that the substitution of an “integrated circuit assembly” was a substantive modification which included the layout of the electrical terminals, but it did not constitute a making. The particular layout of the electrical terminals as defined by integers [5] to [11] was not affected by this action. Moreover, as Calidad submits, it was an action undertaken to enable the data in the memory chip to be replaced and the cartridge to be re-used, not to change the layout of the terminals in any way.

70 The modifications to the original Epson cartridges were consistent with the exercise of the rights of an owner to alter an article to improve its usefulness and enable its re-use. Both English[111] and United States authority accept the prolonging of the life of a product to be within an owner’s rights of use of a patented product. Regardless of whether it is said to be something done which is closer to “repair” than “making”, it clearly does not involve a manufacture or making. And this is so regardless of whether the exhaustion doctrine or the implied licence doctrine is applied.

So, in all judgments whether there was an infringing making of a new product or a merely a non-infringing repair involved a qualitative assessment of fact and degree.

On the “second” point, the High Court adopted the doctrine of exhaustion on sale by a majority of 4 to 3: (Kiefel CJ, Bell and Keane JJ, Gageler J agreeing; Nettle, Gordon and Edelman JJ dissenting).

All the judges agreed that the decision on the appeal did not turn on whether the doctrine of exhaustion or implied licence from purchase applied.[3] Thus, the adoption of the exhaustion theory is strictly speaking obiter dicta. Nonetheless, as “seriously considered” obiter dicta it is pretty much binding on all lesser courts in Australia.

Accordingly, when a patentee sells a product protected by a patent the patentee’s monopoly rights of use and sale with respect to a product arising from statute are exhausted on sale.

If you have clients who sell patented products on terms seeking to control how they are used – for example, a field of use restriction – you should be recommending a review of the arrangements to ensure that they are binding as a matter of contract law. And, if your client also sells the products, or licenses others to sell them, you should be considering whether the arrangements expose your client to breach of the cartel provisions or exclusive dealing arrangements in the Competition and Consumer Act 2010.

ps. Thanks to John McPhail for pointing out that my spring racing fever had confused a horse race in Old Blighty with a brand of printers! What was I thinking?

The Full Court has dismissed Urban Alley’s appeal from O’Bryan J’s rulings that URBAN ALE was invalidly registered as a trade mark and La Sirène’s use of URBAN PALE did not infringe URBAN ALE. The decision may provide some helpful clarification of the test of substantial identity and, perhaps, urges caution against his Honour’s conclusion that URBAN PAEL was not used as a trade mark. 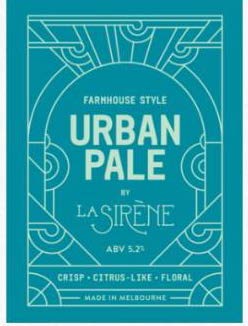 Not capable of distinguishing

The Full Court upheld O’Bryan J’s conclusion that URBAN ALE lacked any capacity to distinguish as essentially descriptive or laudatory. As Urban Alley had not used the term before it registered its trade mark, it was not registrable under s 41.

This was really just the result flowing from the facts arising on the evidence. So a successful appeal was always a steep hurdle.

Practice tip: if you are going to adopt something as a trade mark, it will be unhelpful to refer to it in marketing materials in terms like:

The signature Urban Ale sits somewhere between a classic Australian golden ale and a Belgian blonde, with pleasant tropical notes but a crisp, clean finish.  This is a premium beer for the people and is described as a ‘celebration of our great city, a tribute to the laneway culture and a blend of the old and the new’

One could be mistaken for thinking the trade mark was “Once Bitter”!

Deceptively similar to prior conflicting registration

Likewise, Urban Alley was unable to overturn O’Bryan J’s conclusion that URBAN ALE was deceptively similar to a prior registration for URBAN BREWING COMPANY and so invalid under s 44.

On this part of the case, Urban Alley argued O’Bryan J’s reasons for concluding the two marks were not substantially identical were inconsistent with his Honour’s conclusion that they were deceptively similar and so the latter conclusion was wrong.

In relation to substantial identity, O’Bryan J held that the inclusion of BREWING COMPANY in the prior mark conveyed a different meaning to ALE.

A side-by-side comparison of two marks is a studied comparison. It highlights the differences between the marks just as much as it shows their sameness, in order to reach a conclusion as to whether the two marks are, in fact, substantially identical. The primary judge’s observation must be understood as having been made in that light.

The test of deceptive similarity is fundamentally different. It is not a studied comparison. Rather, it is a comparison between one mark and the impression of another mark carried away and hypothetically recalled, paying due regard to the fact that recollection is not always perfect.

Thus, when considered from the perspective of deceptive similarity and imperfect recollection the differences which were apparent from a side by side comparison lost much of their significance. In that assessment, Urban Alley’s challenge overlooked the significance of URBAN being the first word of both marks and the close association in meaning of “brewing company” and “ale”. At [106], the Full Court explained:

The appellant also submitted that there is “no relevant trade mark resemblance” between the words “ale” and “brewing company”. This submission requires careful consideration. As the appellant’s submission recorded immediately above recognises, each compared mark must be considered as a whole. It is impermissible to dissect each mark to emphasise its disparate elements and then compare the disparate elements of each in order to reach a conclusion on deceptive resemblance. To start with, this would leave out entirely the impact of the common element “urban”. It would also ignore the synergy between the word “urban” and the other word(s) in each mark. This synergy contributes to the impression gained of each mark, which is carried forward into the relevant comparison between the two. This last-mentioned consideration brings into play the primary judge’s finding that there was a clear association in meaning between “brewing company” and “ale”. Given that clear association, coupled with use of the common element “urban”, it is understandable that the primary judge reached the conclusion he did on the question of deceptive similarity.

It might be thought that the strong emphasis on the narrow scope of the substantial identity test, requiring a studied side by side comparison, is a very welcome brake on the ruling in Pham Global.

Having ruled that Urban Alley’s trade mark was invalidly registered on two alternative grounds, their Honours pointed out that Urban Alley’s appeal against the finding that La Sirène did not infringe must fail. So, it was strictly unnecessary to consider whether La Sirène’s use of “Urban Pale” would have been an infringement.

Speaking obiter dicta, the Full Court emphasised that O’Bryan J’s finding that La Sirène did not use URBAN PALE as a trade mark, despite its prominence, turned very heavily on the “overwhelmingly descriptive” nature of the expression. At [119], their Honours said:

Thus, it is entirely possible—indeed likely—that, absent the finding of the Word Mark’s lack of inherent adaptation to distinguish because of the ordinary signification of the word “urban”, the primary judge would have come to a different conclusion on trade mark use in relation to the respondent’s use of the name “Urban Pale” on the depicted label.  This is particularly so when regard is had to the prominence and location of the name “Urban Pale”.  Such use would normally be regarded as persuasively suggesting trade mark use, a consideration which his Honour seems to have recognised in the next paragraph of his reasons, where he said:

205         It is apparent that the labelling of the La Sirène Urban Pale product features the words “Urban Pale” in large lettering and an emboldened font.  It is the most prominent name on the labelling.  However … I do not consider that that prominence converts the essentially descriptive name into a trade mark indicating the source of origin of the product.

Even so, it will be necessary to treat the finding that Urban Pale was not used as a trade mark very carefully and confined to its particular facts. On this part of the case, the Full Court concluded at [120]:

Be that as it may be, our resolution of Grounds 1, 2 and 3 of the appeal adversely to the appellant necessarily means that Ground 5 of the appeal should be dismissed, as we have said.

You may have already received notification about this but, just in case, this year’s Francis Gurry lecture will involve a “conversation” with Dr Gurry himself.

Following his recent retirement as Director General of the World Intellectual Property Organisation – or WIPO to you and me, Dr Gurry “will reflect on his 35 years of work within the United Nation’s multilateral system – and what the future holds for IP.”

The talk will be streamed online on 25 November 2020 – 6:00pm AEST. Times in other jurisdictions and registration here. Registration is free.