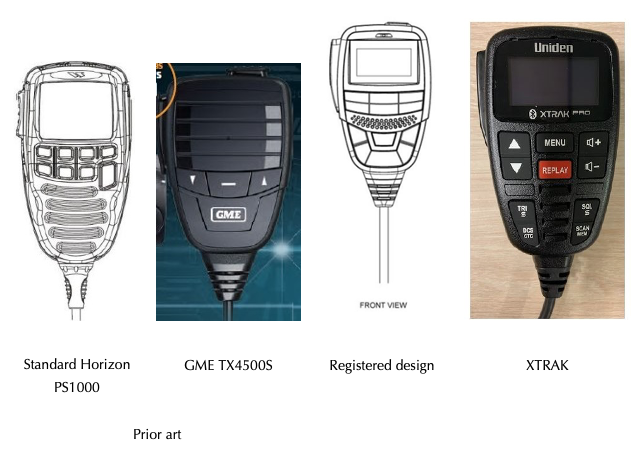 A case of design

Uniden had begun displaying in Australia images of its Xtrak product on its website and in its online shop, but was not yet selling the product. After an exchange of correspondence in which Uniden refused to disclose its proposed launch date, GME sought an interlocutory injunction to restrain infringement of its registered design. Instead, Burley J listed the matter for early final hearing:

How good is that?

GME Uniden and the prior art

By s 71, a person infringes a registered design if they make, import, sell, offer to sell etc. a product embodying a design substantially similar in overall impression to the registered design.

Whether a product is substantially similar in overall impression to a registered design is tested by the matters set out in s 19.

Those matters require the Court to give more weight to the similarities than the differnces having regard to the state of development of the prior art, whether or not there is a statement of newness and distinctiveness[1] and the freedom of the designer to innovate. As GME’s design was registered before the ACIP Response Act, these matters fell to be considered from the perspective of the “standard of the informed user”.

The s 19 factors are also used to determine the validity of a registered design.

Burley J noted that the ALRC had explained how the substantial similarity test was supposed to work at paragraph 6.7:

…. The word ‘substantially’ is preferred to ‘significantly’ because ‘substantially’ has already been interpreted in a copyright context to be a qualitative and not quantitative term. The qualitative test is useful to determine designs infringement without importing a copying criterion. A qualitative test will assist the courts in evaluating the importance of the similarities and differences between competing designs. ….

The phrase ‘overall impression’ is preferred because it encourages the court to focus on the whole appearance of competing designs instead of counting the differences between them.

(The emphasis is Burley J’s.)

Burley J pointed out, therefore, the prior art is relevant not just to the validity of the design but also infringement as it helps determine the proper scope of the design.

Accordingly, where the state of the art was highly developed, distinctiveness may lie in only small advances. If so, however, a correspondingly close degree of resemblance would be required between the accused product and the registered design.

Burley J considered the overall shape of the registered design and the Xtrak was very similar, both being vertically symmetrical curve-shaped trapezoids tapering to the base. The screen arrangement and screen surrounds were very similar. As was the curved PTT (or press to transmit button) and the clear spatial separation below the upper buttons and the lower buttons.

His Honour noted a number of differences. The registered design had a slight “step in” feature (which contributed to the spatial separation between the upper and lower buttons on the front face); the lower buttons in the registered design were arranged a central trapezoidal button where the Xtrak had a central column of speakers; thirdly, the Xtrak had a row of dummy buttons centred on the top speaker element while the registered design displayed a curving speaker panel. Other differences, such as the visibility of the microphone and the top buttons, were relatively trivial and given less weight.

Burley J accepted that there were functional and ergonomic considerations affecting the design of such products. For example, the “basic architecture” of such products would include a PTT button, buttons, a speaker, a microphone, a boss and a downward-facing grommet. Others included a shape that could be held in one hand, the positioning of the PTT button on the left-hand side.

However, the evidence of the prior art showed there was considerable scope for variation in these features so a designer had considerable freedom to innovate.

I take into account the state of development of the prior art in making my assessment, in accordance with s 19(2)(a) of the Act. In my view the informed user would regard the XTRAK to be more similar in overall impression to the GME design than any of the other prior art devices. The prior art base demonstrates that the overall shape of each of the devices considered in section 3.3 above varies considerably, from broadly rectangular, to trapezoidal, to the waisted rectangle of the Crystal. The two most similar to the GME design, in terms of shape, in the prior art are the TX4500S and the Standard Horizon, yet they have more obviously different appearances in terms of their front face arrangements.

First, the statement of newness and distinctiveness was so general, not identifying any particular features, it played no role in the assessment.

Secondly, as noted, the comparison fell to be made under the “standard of the informed user” test applicable before the amendments made by the ACIP Response Act.

In his Honour’s final orders disposing of the proceeding, Burley J refused to make an order for delivery up and takedown against Uniden. The orders included an injunction, the infringing products had never been sold in Australia and there was no reason to believe Uniden would not comply with the injunction:

… the broad principle underlying the making of such order is that where an injunction has been made and, that notwithstanding, there is a basis for considering that there may be a temptation to act in breach of the injunction because of materials possessed by a party, then it may be appropriate to order delivery up and takedown: see Goodman Fielder Pte Ltd v Conga Foods Pty Ltd [2021] FCA 307. That circumstance does not arise in the present case. An injunction will be made against Uniden, a large corporation. There is no reason to believe that it would not behave in accordance with the injunction, as counsel for the applicant accepts. In those circumstances, and having regard to the correspondence which indicates that the XTRAK product has never been sold in Australia, it is appropriate to decline to make an order for delivery up and takedown.

Burley J also adopted a process designed to expedite resolution of the order that Uniden pay GME’s costs of the proceeding.

At the parties’ request, Burley J allowed them 14 days to negotiate the quantum of costs payable by Uniden to GME. If they were unable to agree, Burley J ordered that GME should file and serve within a further 14 days a Costs Summary in accordance with the Costs Practice Note (GPN-Costs). Uniden would then have a further 14 days to file and serve a costs response. If the parties were still unable to agree within 14 days of that service, then a Registrar was directed to determine the quantum including, if thought appropriate, on the papers.

A check on Federal Law Search shows the proceeding as “closed”.